SPRING 2010 EXHIBITION AT THE JAMES GALLERY at THE GRADUATE CENTER 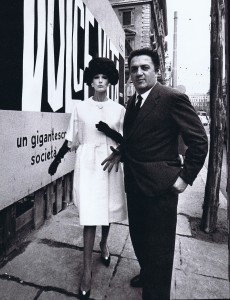 Please click here to view the video of this exhibition.

JAMES GALLERY FEATURES EUROPEAN FILMS AND FASHION FROM THE ‘60S.  MANNEQUINS RETURN TO B. ALTMAN WINDOWS  BUT WITH A NEW TWIST.

Mannequins dressed in 1960s European fashions combined with legendary foreign films of the period to evoke a vital creative era, in the James Gallery’s latest exhibition, FASHION + FILM, The 1960s Revisited, on view from Friday, March 12, through Saturday, May 1, 2010. The exhibition evoked a vital era on Fifth Avenue as the Graduate Center and the James Gallery, with its grand storefront windows, are housed in the former B. Altman department store building at 365 Fifth Avenue (between 34th and 35th Streets).

B. Altman contributed to the launch of Brioni, Roman Style (Luxury Men’s wear) in the US.  B. Altman’s buyers went to Italy to the Florence Fashion shows, organized by Giovanbattista Giorgini.   In the picture below, there is a 1952 red velvet Brioni jacket from the Brioni Archive in Penne, Italy. The jacket was kindly lent by the Brioni Company for the show at the James Gallery.  At the Florence Fashion shows, Brioni was the only men’s fashion house to parade with women’s models. 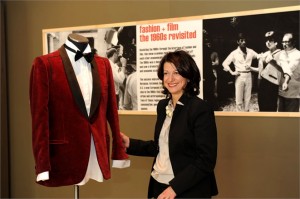 The location of the James Gallery within the historic B. Altman building, key in introducing Italian and European styles in the U.S., makes it a perfect fit for this kind of exhibition and its concept.

Through the viewing of films, where clothes are in action, juxtaposed with the fashionably dressed mannequins, the exhibition explored the interaction between geographic spaces (cities and countries), public spaces, the street, the movie theater, the department store, and private spaces.  2010 marked the 50th anniversary of films such as La Dolce Vita by Federico Fellini, L’Avventura by Michelangelo Antonioni, Rocco and His Brothers by Luchino Visconti, and Breathless by Jean Luc Godard. It was with these films that Italian and European culture, style, and identity became known to the world, especially through the success they enjoyed in the U.S. The exhibition explored the connections between Europe and the U.S. in cinema and fashion, two major culture industries that always feed on each other in both economic and symbolic terms.  The show presented for the first time archival materials, photographs, costume sketches, interviews with stars (from the Archivio San Biagio, Cesena and Giuseppe Palmas Archive) and Italian TV commercials from the RAI (the Italian state television company). It included feature films by Federico Fellini (La Dolce Vita), Michelangelo Antonioni (L’Avventura, Blow-up, & Zabriskie Point),Luchino Visconti (Rocco and His Brothers), and Ingmar Bergman(Persona), Elio Petri (The 10th Victim)—screened on an ongoing basis—as well as clothing in the style of the period. In addition, the documentary Hollywood on the Tiber, presented at the 2009 Venice Film Festival, was shown. The juxtaposition of this rich and diverse material along with film screenings allowed viewers to critically revisit one of the most important and innovative decades of the 20th century.

On Friday, March 12, 10 a.m.–7 p.m., in conjunction with the exhibition, a symposium featured internationally renowned scholars in the fields of film, art and fashion. Adriana Berselli, the costume designer who worked with Antonioni on his L’Avventura, spoke of her experience as a costume designer. Other scholars explored the multifaceted relationship between fashion and film and their impact on the construction and projection of personal and collective identities and style. For the full schedule of the conference visit:  http://centerforthehumanitiesgc.org

Please see the Gallery for the exhibit below: 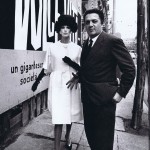 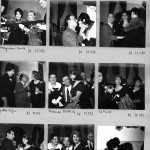 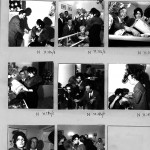